Back to all posts

We Hit Our First Kickstarter Goal in 11 Hours! 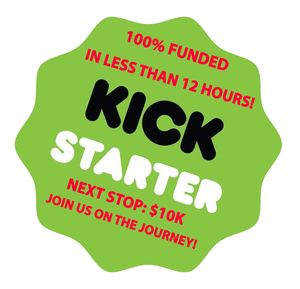 Our Kickstarter campaign launched on March 15 at 12 noon EST, and on that very same day at 11:27PM, we were a fully funded campaign. That means one very important thing. It means we will receive all the money donated to our effort at the end of the campaign on April 13, 2021.

Attaining that first goal is HUGE! It's EVERYTHING, actually. Without it, there's no game to play.

So it's official. WE ARE IN THE GAME. COOKING WITH GAS. "FUNDED," as they say in Crowdfund speak. And that's our language this month. We are fluent in it.

It's why we say things like, "now that we've hit our "initial goal" it's time to "SHATTER IT!"

You know, catch phrases. Things to inspire more people to jump on board. We are a "winning team," people! We hit "THE GOAL."

"More?" Kristen, Cathy and Nini say to each other, with dread rumbling in their bellies. "We can't just go back to our home studios and make music with drop boxes and email each other links about the cool new microphones we bought at Sweetwater Music.com?

No ladies, you can't. I mean. Yes ladies, you can do that. But you have to do some other stuff too. You're funded now. The switch has been flipped. The on button has been pressed. You are BACK. And you are BETTER THAN EVER. And don't you forget it.

It's time to start planning music videos. And you actually have a few tracks you haven't finished yet. Remember those? There are still at least two songs not totally recorded. One isn't even fully written, but you are finishing it as we speak, right? And probably two songs that need to be mixed and mastered, whatever that means. Mixed and mastered is music speak for "not free." Even with your cool home studios, you can't mix or master anything. In fact, after 25 years of making recordings, you still don't even really know what mastering is.

And now you actually have people who are waiting for you to load new tracks to the "secret page on your website" with the "sneaky all access code" that Kristen's daughter Kate thinks is "a ridiculous passcode, Mom."

So this journey really is just beginning. Fully funded is the same type of relaxed feeling I got after my first trimester of pregnancy. I hit that milestone and thought, "Phew, I don't have to worry about this baby anymore." And ten seconds later I started worrying again. And twelve years later I am under the watchful eyes of a therapist to get me through the "tween" years. Quite happily, I might add.

So here we are. Happily funded, and trudging forward to the next milestone! $10K is next, but let's be honest. $20K would be EVEN BETTER!